Paestum was a major ancient Greek city on the coast of the Tyrrhenian Sea in Magna Graecia. After its foundation by Greek colonists under the name of Poseidonia (Ancient Greek: Ποσειδωνία) it was eventually conquered by the Lucanians and later the Romans. The Lucanians renamed it to Paistos and the Romans gave the city its current name. The ruins of Paestum are notable for their three ancient Greek temples which are in a very good state of preservation. Today the remains of the city are found in the modern frazione of the same name, which is part of the comune of Capaccio in the Province of Salerno.

Paestum is home to three magnificent Doric temples, which are thought to be dedicated to the city's namesake Poseidon (known to the Romans as Neptune), Hera and Ceres. The temples of Neptune and Hera are located next to each other at the southern end of the site, while the smaller Temple of Ceres is at the northern end. You can walk up close to the temples, but they are roped off to prevent interior access.

The temple of Hera is the oldest of the three temples, built about 550 BC. It is sometimes called the Basilica, based on an error of earlier archaeologists in thinking it was a Roman public building. Unlike the other temples, the dedication of this one is certain, thanks to inscriptions to Hera on the temple. An open-air altar was unearthed in front of the temple, where the faithful could attend rites and sacrifices without entering the cella (the holiest area accessed by priests). 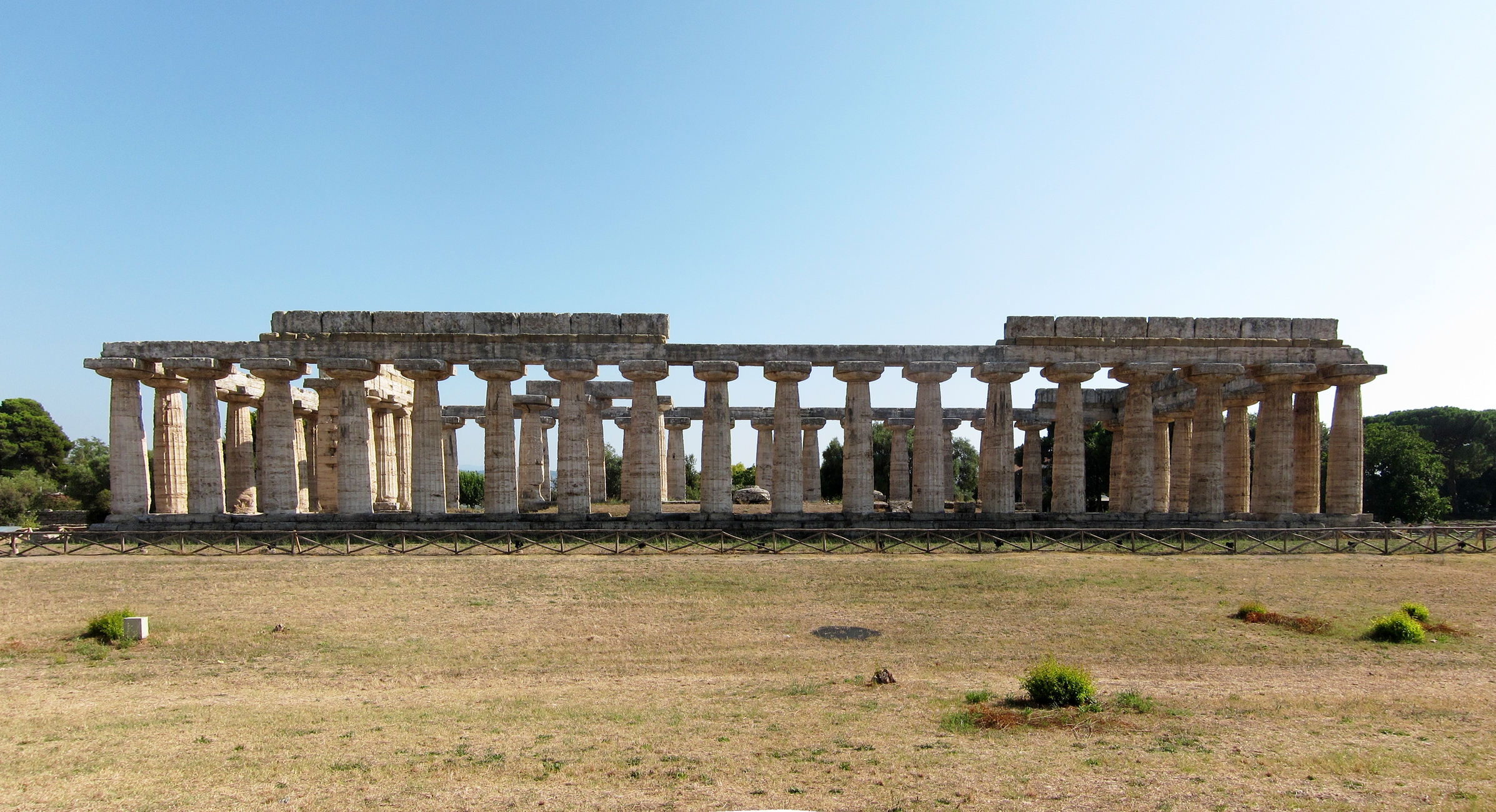 The Temple of Neptune (or Apollo or Hera II) next door dates from 450 BC and is the most complete of the three - everything remains intact except the roof and parts of the inner walls. It has double rows of columns. On the east side are remains of two altars, one large and one smaller. The smaller one was added by the Romans when they cut through the larger altar to build a road to the forum. Statues around the larger altar may indicate that Apollo was patron of the temple. Another possible dedication is Hera, like the temple next to it. 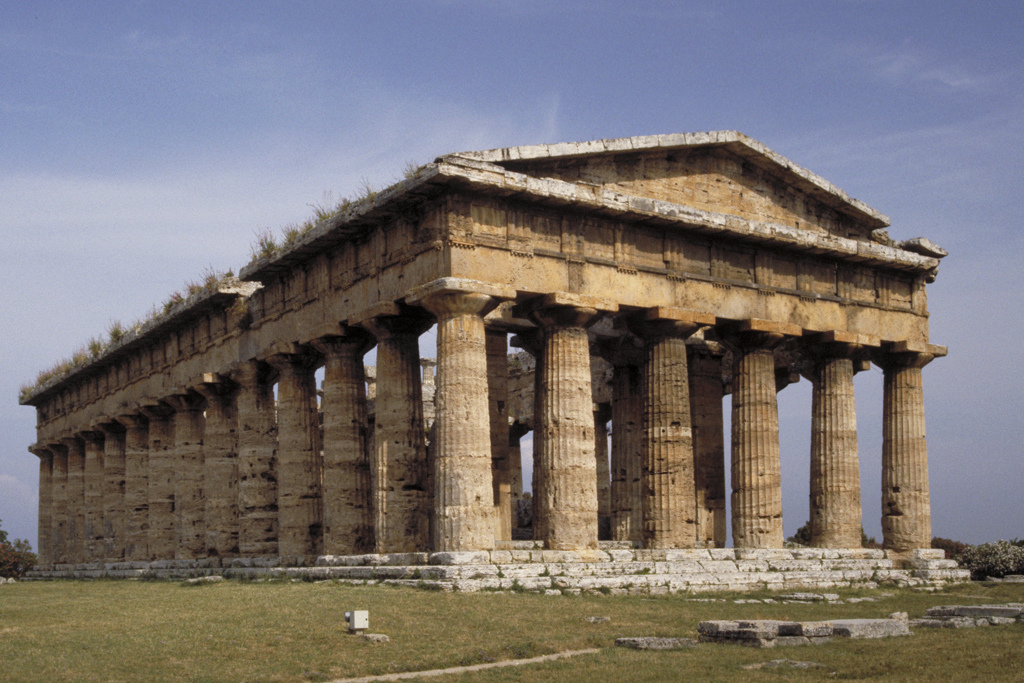 The Temple of Ceres (or Athena) was built in c.500 BC in a transitional style between Ionic and early Doric. It was later used as a Christian church, as indicated by three Christian tombs discovered in the floor. (There was also a new Christian church built in Paestum in the 5th century, which still stands today.) The middle of the site consists of the Roman forum, with extensive foundations of various public and private buildings. Northwest of the forum is a small Roman amphitheater, of which only the southern half is visible. In 1930, a road was built across the site, burying the northern half. It is said by local inhabitants that the civil engineer responsible was tried, convicted and received a prison sentence for what was described as wanton destruction of a historic site. 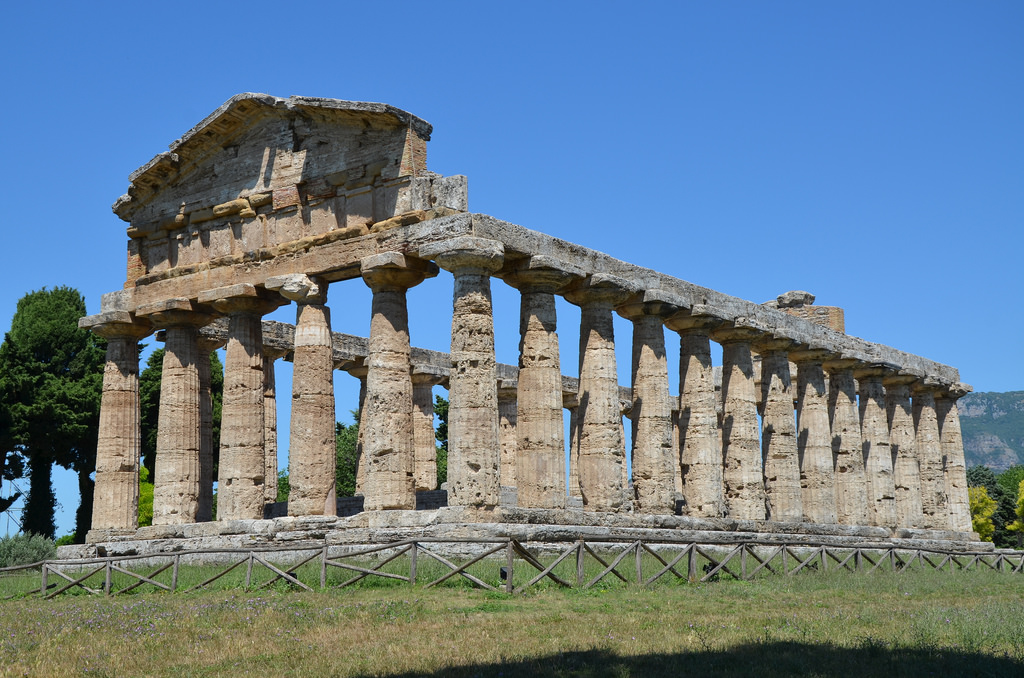